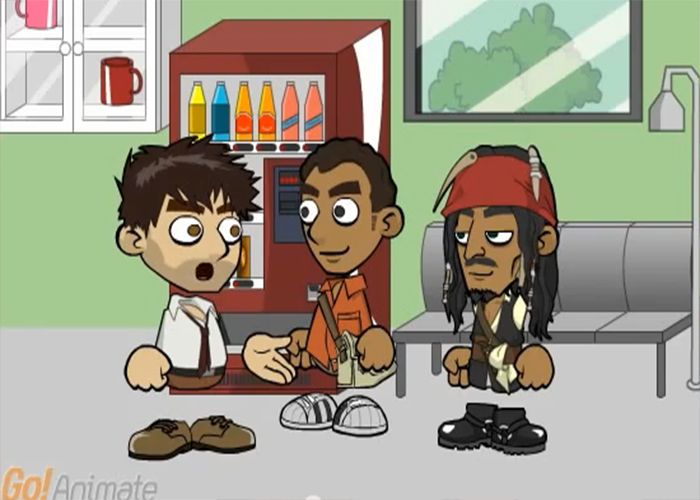 I have been waiting to respond to Mark’s advice against shoveling social media down throats. The animator in me (remnants of a past life) has also been itching to experiment new ways of blogging, content marketing and creation.

Well, I finally made the time and decided to tackle 2 birds with one stone…here are the results.

Since I plan to do a review of  GO!Animate as a content creation tool, I used the opportunity to test out how far I could go with the basic version  in a relatively short time (though I had to upgrade to the GOplus version to post on youtube). [Edit: 16th June – Review >Easy Video Content Creation with Go!Animate ]

This meant I had to put up with limitations including the inability to add finishing touches, customize characters, manipulate voices etc.

I now  probably owe an apology to Mark for the Cpt. Jack Sparrow likeness, but since Mark is on an unplugged vacation for about 2 weeks I am safe for now.

For those who prefer the written word, I am mostly on Jay’s side in this debate (but I still love you Mark :)).  I believe that Jay’s viewpoint is more in sync with my own opinions on the matter.

In the long run I think that the long term success and evolution of social media will be in a decentralized direction, both in its future utility as well as in its underlying philosophy.

To put it simply; A decentralized structure does not lend itself to being manipulated easily and thus earns trust. Any media that can be controlled and measured to produce predictable results will be less trusted than that which is free.

Future social tech entrepreneurs will vie to make their offerings even more trust enabling than Facebook, Twitter etc., currently are. That means more decentralization than less. Businesses will simply have to learn to cope.

How will businesses handle the WikiLeaks and Social Media era?

The Genie is out of the bottle. You think we will let it back in? Do we even want to?

3 thoughts on “When I met Mark Schaefer and Jay Baer on GO!Animate”