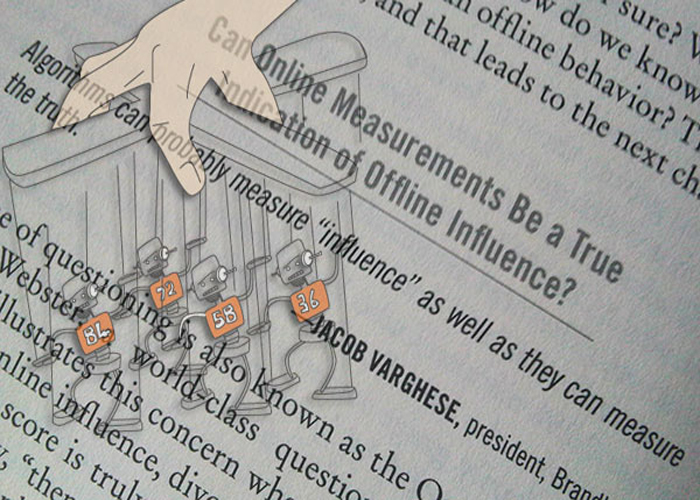 If you read my previous opinions on social scoring, you know I’m skeptical on the viability of  ‘influence metrics‘. However, when Mark Schaefer (of the engaging marketing blog {Grow} ), mentioned me in his latest book  ‘Return on Influence‘,  I decided to give the concept another look.

I took Mark’s advice to heart; to look at the  ‘trend’ rather than the  ‘emotion’ of being scored, and decided to enjoy Mark’s writing as I usually do. After all, he is a terrific storyteller.

To cut to the chase, my opinions on the commercialization of social scoring remain unchanged. I agree that social scoring is a trend. Where I differ from Mark is that, it is short-lived and/or not as significant as it is made out to be.

As opined by many including one prominent sheep farmer Danny Brown (moonlights as a popular blogger and social media personality), the accuracy and viability of such social scoring mechanisms are debatable. The ability of social scoring to make as big an impact as the ‘Return on Influence’ suggests, is also mired in very basic inconsistencies.

Much like in quantum theory where the very act of observation changes the outcome, social scoring impacts authenticity. Mark’s book  is full of examples where social scoring is used to treat people differently and ‘commercialize’ (Klout perks is an example) online activity. This shows that the very act of being observed and measured is affecting authenticity; the declared cherished cornerstone of social media marketing and interaction.

2) Digital divide is still too great

I touched on this digital divide in another post; but I think that when one likens social scoring to widely used financial mechanisms such as credit scores, they should also consider the reality that for most people, commercial gain and trade is not the primary value proposition of social media participation.

Rather than financial metrics like credit scores, I would  draw an analogy of social scoring in the context of religious institutions.

While individuals and businesses could benefit (even financially) from participating in the religious institution’s activities; any attempt to establish a mass ‘religious ranking’ metric would be incredulous. Imagine publicly rating the ‘religiosity‘ of individual members of a congregation/church/temple/mosque based on attendance, charity and pious speeches. It flies against the primary value proposition of the institution; even if Audi and Coca-cola think the metric a great enabler, to sell cars and sugar water to certain demographics.

More of that in point#3.

Internet marketing folk and advertisers have a vested interest in the social scoring trend and are predictably among the first to see it as a metric for the long haul. This enthusiasm will be fed in a self-fulfilling echo chamber, before it dies, like so many other similar trends do. The digital divide will relegate social scoring to certain niche and geographical areas, further eroding the value of commercialized social scoring in its current form.

3) Future trends are citizen-centric not consumer-centric

In addition to the above, it is very likely that with increasing commercialization, regulation and oversight, the future path of technological evolution is towards non-measurable (or difficult to measure), free (with minimal regulation/oversight) and open platforms like parallel internet ecosystems.

Overestimating the viability of current methods of public social score ranking, is primarily based on the assumption that the future of the internet and technology lies in consumer-centric ecosystems rather than citizen-centric infrastructures. Evolutionary technological  and socio-economic trends suggest otherwise.

Social scoring algorithms have a better chance at longer, meaningful lifespans, ‘under the hood‘ of search and social platforms. Rather than in-your-face, single/double digit flashy badges.

Mark’s book is worth your time because:

In fact, though my opinions on social scoring remain the same, I recently gifted a copy of this book to a potential business partner/investor. I think it has good value as a crash course introduction to social media marketing.