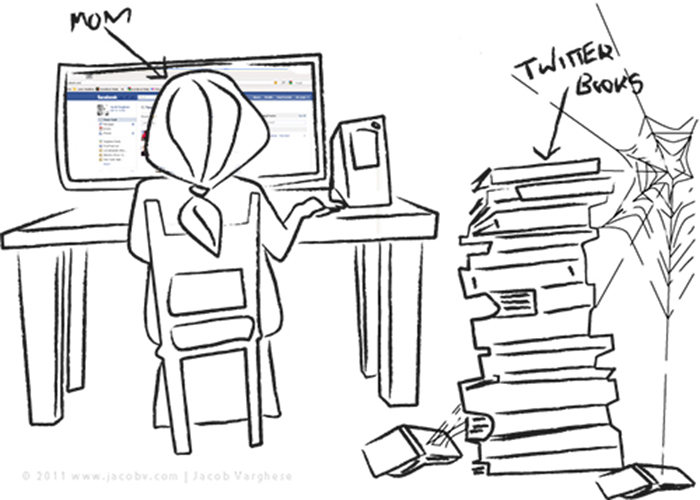 My Mom would probably never use Twitter. Come to think of it, neither would my ‘Facebook’ savvy brothers, one of whom probably has more tech skills than the average bloke (bet he still remembers at least 5 DOS commands)

If only they read the ‘How to‘ books about  Twitter, which outnumber by 1:100, similar books about Facebook.

Facebook is intuitive to people like Mom. If Mom needed a book to explain how to use Facebook effectively, she would not be commenting on almost every photo posted on fb; I love you Mom.

Even so, the information is incomplete. The many literary volumes fail to mention following Twitter idiosyncrasies

Twitter chats are deceptively tricky.  E.g.: If you are going into something like a leadership chat, you better have a book on leadership quotes handy. Fail to do this and you could be ‘outleadered’ by eloquently poetic (even painfully grandiose) quo-weets.
These chats light up when someone like a filmmaker from South Florida comes along to exercise his acerbic (and frequently astute) observations.

This tweing reminds me of hyperactive Hammy from ‘Over the hedge’.   The only thing that seems to drive their over-representation in your Twitter feed is, the ever accurate Klout metrics.

The slightest dip in scores and the Klout-bots are likely to go on a Twitter chat rampage, causing Twitter outage.

Until you pray for an acerbic dude to show up, if only to prevent fail whale sightings…but then, unfortunately, Dan cannot be everywhere. He probably has work to do.

I can hardly hold a candle to Seth Godin‘s achievements, but the Dan in me is alarmed that he has released some of his ideas into the wild; open to interpretation by, who knows?

History and even current events are proof that tribal mentality is not always benevolent or progressive. The concept has resonated well, perhaps for all the right reasons, in digital marketing circles.

It has been but a short leap from there, to virtual strudel sharing by members of all Twitter ‘tribes’. O.k I’m generalizing, maybe not all.

Here too, Dan may pop in to provide respite from tribal self- aggrandization and backslapping. I have personally had to set aside my tribal hashtag beverage to respond to Dan on one occasion (before I thought him astute enough).

Outleaders, Klout-bots, Tribal strudel sharing and Dan are now an enjoyable, even endearing part of my Twitter feed.

Mom would never ‘get it’ though. Would your Mom?

This site uses Akismet to reduce spam. Learn how your comment data is processed.