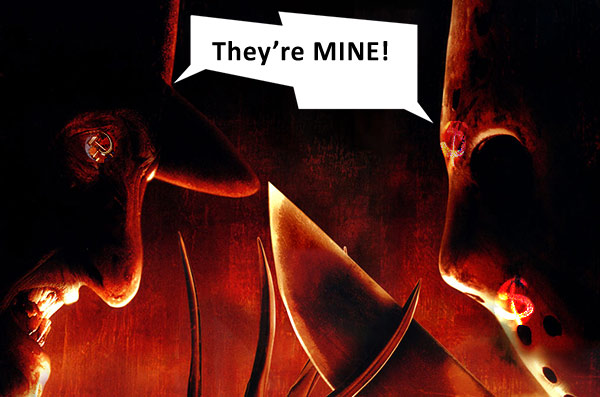 A nightmare tied in with all the arguments for and against the OWS protest; a predominant perception; an epic battle brews between Capitalism and Communism/Socialism.

I’d think Freddy to be communist. Tempting with dreams of utopia, only to dismember you in a fiendish, otherworldly gulag.

Jason on the other hand, seems more capitalist. A purposeful, indomitable and unfeeling monstrosity. Leading unlucky victims to an ill-fated destination.

Really though? Is it really about that?

Be they glorified by ‘Atlas Shrugged’ (on my fav list) or ‘The Communist Manifesto’, both these ideologies are relatively new to human history. At least in their recent implementations, if not in a broader sense.

In the past few decades we saw communism fail. I think we are now seeing capitalism doing the same, if not being thoroughly tested.

It’s obvious that something is wrong. In the financial Titanic the Europeans seem to be sailing on, the protests in streets across the globe, and the pain of the jobless and destitute in many western nations. Even the BRIC countries are bracing for an expected slowdown. Brazil has cut it’s interest rates today, and China could lose 70% of its jobs tomorrow.

You may think the OWS movement an incoherent hippie, as is the stock market these days. However, one cannot deny that there is a palpable negativity directed against the financial system.

The OWS movement is growing in strength, spreading. The reactions of a previously skeptical chemist, the artwork of ad creatives, are all testament to a yearning for change. Technology abets the spread, creating a perfect storm to bring that change about.

Anybody who is buying or selling anything should be well advised to pay attention. Especially those who are selling, better recognize the undercurrents lest they continue peddling sugar water to the morbidly obese.

Which brings me to the digital marketing circles I often associate within. Though posts by Aaron Beibert and Eugene Farber show a tad too much affinity for Jason Voorhees, at least they are speaking outside the Klout-decked, online marketing echo chamber; part of the debate. Of course, as Americans they can be forgiven for thinking that it’s all about them conservatives vs. democrats. Here too there is hope, however slim, the twain shall come together, as Barry Ritholtz opines brilliantly.

I think neither capitalism nor communism to be infallible. If there is room for these ideologies to evolve, NOW is the time. That, can really come about, only if all of us are part of the process and debate.

Is OWS about the right and the left? Some conspiracy funded by George Soros and Spanish communists? Whining of the lazy? Is lynching industry and innovation the answer? Socialism? OR Is there something going on that we all can work together for.

After all, the only thing that can now keep people away from the streets are jobs. You see that coming in Greece, Spain or even the US? The longer this financial drama goes on, the worse it gets globally.

Our best option seems to be to shape the debate and the inevitable change. Maybe not on the streets or a makeshift tent, like the more passionate ones. Have your say here, on your blogs or wherever.

If not, the danger is real; nubile teens will fall to Freddy as Jason loses ground.

So. What do YOU think?

6 thoughts on “Freddy vs. Jason. The OWS Story”